Today is the last day to see the Dream Arcade Exhibition at Light Grey Art Lab! This collaboration, show, and creative endeavor has been an incredible adventure in both art-making and game playing. Throughout the week, we will be celebrating some of the artists that contributed to exhibition, getting to know their work, and sharing their process through artist interviews!

Dream Arcade prints will be available on the online shop through October 10th. All of the work is also permanently archived on the Dream Arcade Gallery, on the Windows App Store, and available for playing on the Light Grey website! 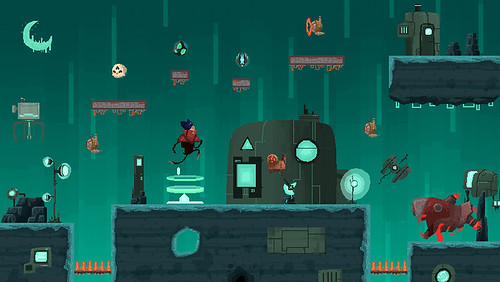 Meet Joey McCormick. Joey is a graduate from the Savannah College of Art and Design, specializing in Animation. He has worked in Atlanta, Los Angeles, and New York City as a graphic designer, freelancer, and animator. Over the past several years, Joey has been working with talented animators and art directors on projects such as 'Oreo' with Hornet Inc. and 'Chobani, Fruits and their Mating Games' by Borja Pena at Psyop. This is the first time Joey has exhibited here at Light Grey Art Lab, and we could not be more excited about his contributions and process! 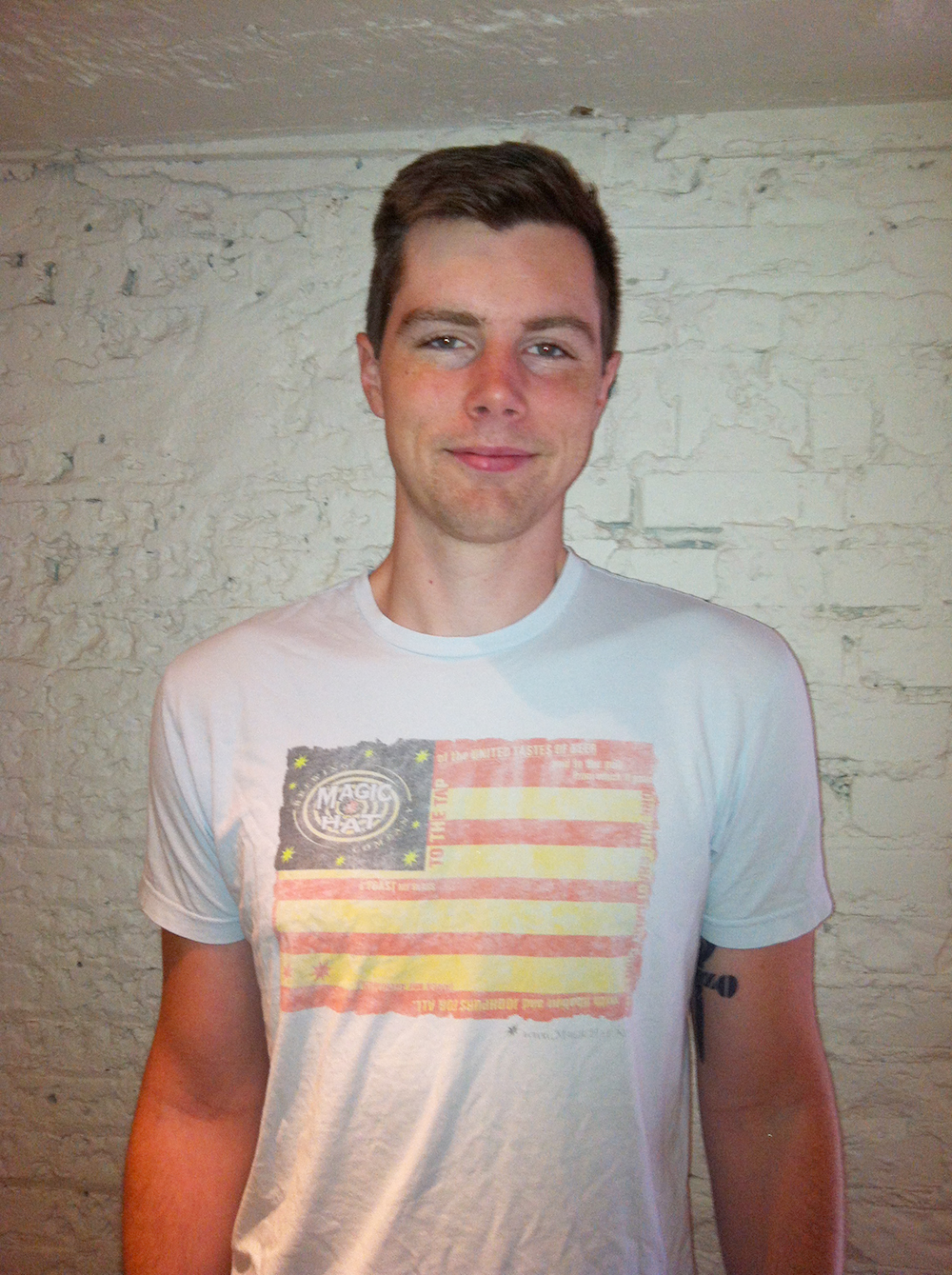 Hi Joey. Could you describe your studio practice? (Where you make, studio habits, materials)

My studio space is a small desk in my living room. It's pretty uninteresting. I do most of my work on a surface pro 2 and computer paper. I like computer paper since I can toss it if it doesn't work. The surface pro 2 is excellent, I also use a Cintiq, but I like being able to move around freely because I’m sort of flinchy!

Usually I freelance with studios in-house, and when I work from home I try to stay on that same schedule. I head out early in the morning for a bike ride. It burns up extra energy so I can focus. Then I get back and put on head phones. Even if I'm not listening to anything, it's like having blinders on. 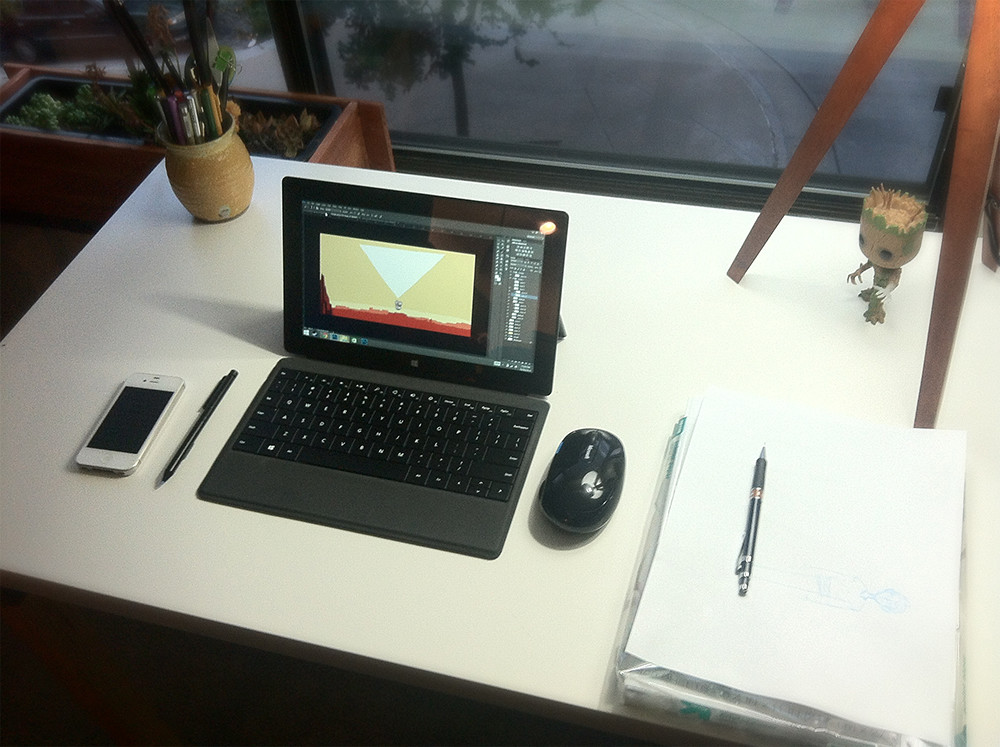 Could you describe your creative community? Do you often work in a collaborative environment?

The creative community I work with is fairly small. Mostly people I've worked with already and a few people from school. But the community is extremely talented and ambitious. We all work with each other supporting and pushing to produce higher quality work. We also share contacts as much as we can. I've begun reaching out on social networks like tumblr and instagram. Making friends with other artists and inspiring each other. It's really a great way to grow!

I usually work in a collaborative environment. Even when I'm the only designer on a project. I'll work with directors or producers. When doing personal work I get feedback from people I trust. I'm working on a short now with a small team. That way we can all bring a lot of our own choices to the project. 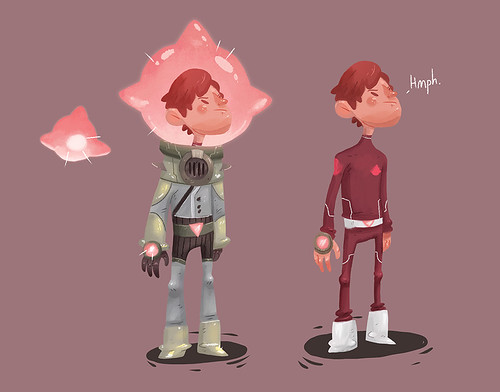 Could you share your process and inspiration for the animations and characters you made for Dream Arcade?

I love space and scifi! I also enjoy using graphic shapes in my work, especially triangles. So that was the jumping off point for the Dream Arcade. That interest translated really well to pixel art animations. All my effects were simple geometric shapes enlarging or flashing. For the character, I was originally planning to make a space knight with a sword, but I wanted the character to look cleaner than that. Eventually, I went with the energy claw type weapon that just appears during the attack. For the character animation, I roughed it all out in Flash, then exported it as a .png sequence and brought those into Photoshop. Each frame was a layer. Next, I cleaned it up in the pixel art style. My 'effects animations' were all created in photoshop. I made loops of squares and triangles flashing or exploding then repeated them in most of the effects. I was really happy with how they turned out!

What were the initial concepts and considerations for your world?

Originally, I wanted the world to be a mix of scifi space and medieval fantasy, but I wanted the world to feel cohesive- combining the textures. After doing some sketches, I decided to create a meteor world that is still in development. It includes big, chunky designs that are still futuristic, and the texture of the ground would read clearly against the metal assets.

What are some of your favorite subjects and imagery to include in your work?

Triangles. That's not really a subject or imagery, but I really like to include that shape. And I always love to use with a fantasy or scifi imagery. Drawing a guy drinking coffee is fun, but drawing a robot powered by arcane magic and drinking coffee is more fun!

Outside of professional work, I'm working on two short films. One is called “Onions Stay in the City”. It's just me working on this one, and it's going very slowly! I'm on the background stage now, hopefully I’ll move on to animation soon. The other is “Sugar Rush” by Alex Horan. He's directing and animating it and I'm doing the backgrounds. It's really fun, and is going to be a little inappropriate for younger audiences. It involves a lot of ice cream cone strippers!

What are some of your biggest inspirations to your work? (artists, mediums, books, etc. )

I'm constantly inspired by other artists. Kevin Dart has been one of the biggest inspirations of mine. I love his use of lighting and color. Another big influence of mine would be McBess. His use of typography and character feels very modern, but throws back to classic cartoons. More recently, I've been into Fabien Mense, and a lot of French illustrators. And I don't think I can talk about scifi without bringing up Creature Box! They're an amazing pair of artists that do some of the best robot, monster, alien or anything weird like that designs. Really dynamic and always have incredible color. And Erik D. Martin and Ryan Lang taught me so much about digital painting and how light works. And if you follow my tumblr you can clearly see that whatever video game I'm currently playing is inspiring my work!

You can find more of Joey's work on his website here, and follow his current projects on tumblr. You can also see Joey's work for the current Dream Arcade Exhibition on the Light Grey Shop and play the game on the website here.
Posted by Jenny Bookler at 11:00 AM